The latest UK Rental Market report from Zoopla shows average UK rents are up 4.6% on the year at the end of September, after climbing by 3% in Q3 as demand rebounded in city centres and strengthened around the country.

Average UK rents excluding London are up 6%, the highest level in 14 years.

The resumption of more ‘normal’ life; offices, restaurants and bars, cinemas and theatres and other amenities re-opening – as well as students looking for accommodation, has led to strong rebound in rental demand. This has coincided with the seasonal uplift in activity in the rental sector, with a resulting uplift in rents. 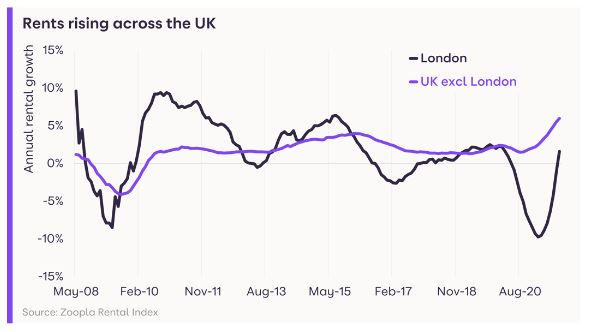 The increased demand for a rental home comes as supply remains low, with total stock levels some 43% below the five-year average, putting upward pressure on rents.

On a regional basis, rents in the South West of England climbed 3.3% between June and September, and are now up 9% on the year, making it the region registering the fastest rental growth in Q3.

Some areas in the South West have seen real pressure on the supply of rental properties amid higher demand, especially during the pandemic, as some households looked to move to more rural and coastal areas.

The average time to let out a property (between listing and rent agreed) was below 10 days in the South West in Q3 – the only region where this is the case. And rents in Purbeck, in Dorset, are up by 16.2% on the year, the UK’s highest rate of rental growth.

Rental growth is close to, or at 10-year highs in most regions across the UK, except London and Scotland, as rental demand continues to outstrip supply. There is also a correlation between the regions which have the highest rental growth and their relative affordability. 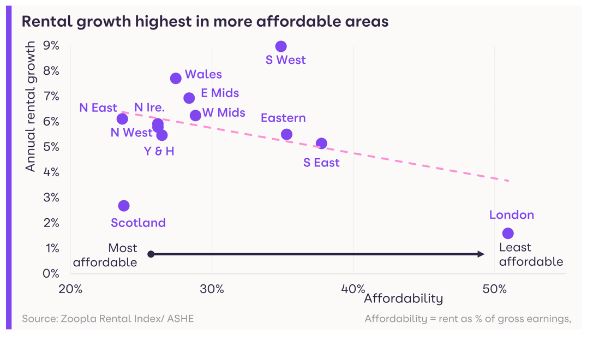 London’s annual rental growth is lagging, and even through rents have become more affordable, it remains the least affordable rental market in the UK. However, the marked resurgence of rental demand in central London mean rents rose by 4.7% during Q3 alone.

Activity in the London rental market also rose markedly during Q3, with tenancies agreed running 50% above the five-year average, underlining the bounce back in the market.

Zoopla expects the rebound in London rents to continue, but even so, the falls over the last 15 months means that average rents are still 5% lower than they were at the start of the pandemic.

In the UK’s other major cities, the swing back to the city centres is clear, with rental demand in the central zones of each of the cities in the chart below at least double that in Q1 this year, except Edinburgh, where the rise was +60%.

This is reflected in the strong rental growth seen in Q3. Rental growth in the outer zones of cities remains steady, reflecting the pandemic appetite for rental property in the wider commuter zones. 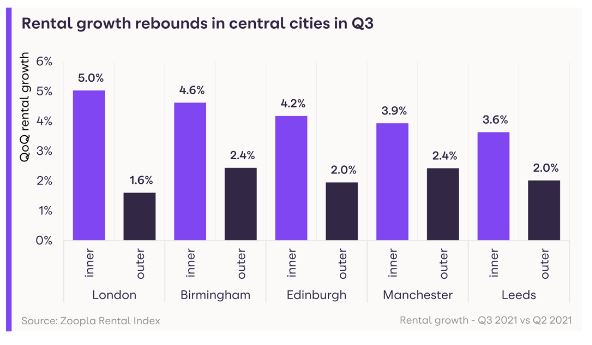 Rental demand is running well ahead of supply, as has been the case for more than a year. In the short-term, the post-lockdown bounce-back in demand has eroded available supply, but there is a longer-term structural issue here too.

Since the introduction of the additional 3% stamp duty for buy to let investors in 2016, as well as other tax changed, levels of landlord investment into the market have fallen.

There has been increased activity during the stamp duty holiday, with landlords using a mortgage to buy accounting for around 9% of transactions this year, according to Zoopla estimates.

However, this was not enough to fill the larger gap left by lower levels of investment into the market as the tax and regulatory burdens have increased.

Build-to-Rent is becoming a more standard asset class in the UK, but in scale, it is still a very small part of the market, and will not begin to plug the gap left by landlords for years yet.

As such, the structural undersupply of rental properties across the country will support rental growth into 2022 and beyond. 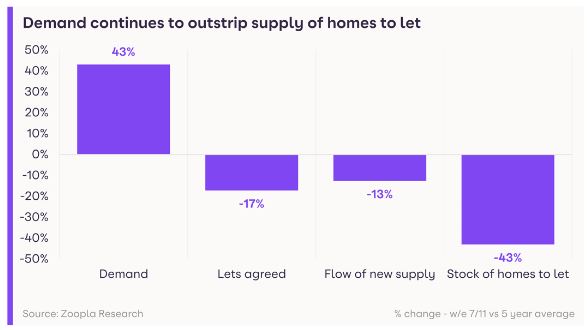 As the chart below shows, the distribution of rental demand in 2021 has shifted up the price band scale.

This will be a reflection of the rises in average rents seen over the last year in the UK, excluding London, but also signals an increased demand for larger properties, with more space, echoing a key driver in the sales market at present. 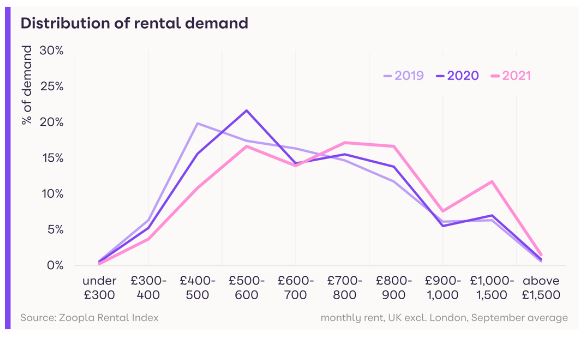 Despite the pandemic, the employment market remains relatively robust. The number of job vacancies is at a record high. This signals continued strong demand for rental property moving into 2022.

Rental demand may ease in the coming months, as Q3 tends to be the busiest time in the highly seasonal rental market. However, we expect demand levels to remain higher than usual, especially in city centres where there is an element of pent-up demand being released.

On the supply side, rental stock will remain tight, amid lower levels of investment into the sector by landlords, and this will underpin rental pricing.

There is more leeway for stronger rental growth in areas of the country where rents are relatively more affordable, suggesting that rents could rise above earnings outside the south of England, supporting rental growth across the UK excluding London at 6% in 2021 and 4.5% in 2022.

In London, the bounce back in rents has further to run. Zoopla anticipates a strong finish to the year this year in London, taking rental growth to around 4% – boosted by the opening up of global travel for central London’s international rental markets.

In 2022, they forecast that this level of rental growth in London will broadly be sustained, at 3.5%.

How much is my property worth?

Own a property and want to know how much its worth?

Want to find & contact your local branch of Merry's?